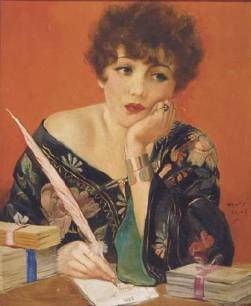 Hello lovely traveler that by chance has come this way,

Has it really been a year since last I wrote in my dear blog? Whatever put on pause my whimsical writer’s hopes and dreams? At what point did I forget to live, merely to survive?

But…I am now free. Free to love me as I am. Free to smile and laugh as often as I want. Free to learn. Free to dispute and challenge old patterns of thought that never did me any good. Free. Simply and irrevocably free.

And it is in celebration of my new found freedom that I am proud to announce I have taken up writing once again. Do I feel a bit intimidated? Yes. Worried about not being good enough? Yes. I am after all but human. Am I excited? Thankfully, the answer I must give is once again yes.

Here is my latest entry on the novel I started over 2 years ago. The working title was The Girl With the Red Umbrella. I say “working,” because it helps me to have a title of sorts to better visualize the overall emotion that must be encompassed in my written projects. But as any writer can tell you, each story has a mind of it’s own, full of unforeseen twists and turns. So until the last word of a novel can be jotted down, there truly is no sense in pretending that even the author knows what the story’s name actually is. There is so much left to discover about my characters, the adventures within, and the degree of emotional intensity we must strive to overcome.

And so, without further ado, I present my first piece of actual novel writing since last year. Love it, strive to understand it…and it in turn will love and understand you.

Yes, I suppose I just named you…my diary…”Lula.” And well you may wonder why! Well you see Lula, it used to be I started off my entries with “Hello Friend.” But ever since I moved in with Uncle Di, that salutation seemed a bit misleading. Mostly because now I have actual human friends, and not just a diary to talk to. And by human friends I don’t just mean Uncle Di. I mean, he IS my friend of course, but he’s mainly an uncle first. So there’s that.

Don’t worry, I’ll make sure to tell you all about the actual human friends that I’ve been making at school and Uncle Di’s shop. But first I wanted to write down an interesting conversation I had with Uncle Di today.

It seems Uncle Di had a rough day at the shop today. Mostly thanks to a mom who came in with three kids who…assuming my Uncle’s description of them isn’t biased…sounded like worthy foes to encounter in battle. (I’m not sure what kind of battle exactly, but they sure sounded like worthy opponents for any battle you’d want to think of.) Uncle Di says they managed to rip one of the canvas paintings he’d just set up for sale. The mom paid for it of course, but tried to leverage Uncle Di’s sympathy by explaining that all three of her kids were adopted. The adoption excuse (emphasis made by Uncle Di, not me) didn’t  work it’s intended charm on Uncle Di though.

“As a rule, children are evil little geniuses. I’m of the opinion that if people are that desperate for an heir, they should hold off on adopting until the age of 22,” Uncle Di scowled eloquently.

(I say “eloquently,”  because one must never underestimate just how eloquent a scowl can be. )

“Who should be 22? The parents or the kids?” I asked immediately. You see Lula, sometimes Uncle Di isn’t overly clear when he gets started on a ramble.

“The kids of course,” Uncle Di rolled his eyes quite dramatically at me. (Mostly because being interrupted is one of his pet peeves.)

Needless to say, I decided his statement needed to be reevaluated because it was obvious that Uncle Di had momentarily forgotten two very important details. One being that he is my legal guardian, so of course this leads me to wonder if having adopted me means he is unconsciously in desperate need for an heir. Two, I’m not even 13 yet.

This prompted to me ask Uncle Di if having adopted me before the age of 22 was a conflict of interest. His scowl subsided and he flicked his hand carelessly.

“Ems, don’t be silly. You know there are always exceptions to the rule,” he smirked at me.

But then something else came to my mind, and I couldn’t feel light-hearted just yet. I asked him about the whole mom thing that I’m not really supposed to talk about in public. Uncle Di frowned and snorted that my mother was “most definitely an exception to the rule.”

I guess being an exception to the rule isn’t always a good thing.

p.s. “Foes” is the interesting word for the day. It’s an old English word that means “an enemy or opponent.”  According to the dictionary, at one point in time it even had something to do with the word “feud.” Which completely makes sense if you think about it. But I’m not going to write down what “feud” means, because that would be going off on a tangent. Uncle Di says I go off on tangents a lot, and I’m pretty sure he doesn’t mean it as a compliment.

Is your bookshelf hip?

Google insists this is cool…